Welcome to the world of typography. Windward works with type every day. We think about how we use type and we obsess over its spacing and alignment. Visit this page for occasional articles on type design and technology.

The Univers of Adrian Frutiger

In 1954 the French type foundry Deberny & Peignot asked Swiss designer Adrian Frutiger to advise on typefaces that could be adapted to the newly practical technology of photocomposition. Frutiger had been experimenting with a sans serif font that had been inspired by earlier designs. This experiment eventually became the Univers type family, one of the most significant and popular designs of the twentieth century. It established Frutiger as a creative force in type design, and it was the first of his type families to enjoy wide commercial success. 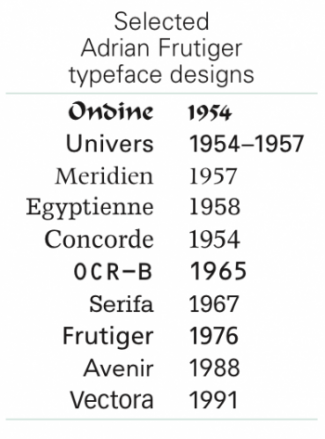 That year was the intersection of many trends in design and printing. Offset lithography was gaining acceptance as a superior method for color printing. This, in turn, drove experimentation in methods of setting type photographically. By the end of the decade several commercially viable phototypesetting systems were available, and the quality matched or surpassed the finest metal typesetting.

Typographic tastes were also changing. While sans serif typefaces such as Franklin Gothic, Futura, and News Gothic had been popular, the 1950s saw an explosion in advertising and in demand for more modern and distinctive type designs. Univers and its contemporary, Helvetica, were refinements and adaptations of earlier sans serif designs including Futura and Akzidenz Grotesk. Univers was the first to come to market and it was immediately popular. It was so successful that the Haas foundry issued a competitor, Helvetica, in 1957. The original weight, Helvetica Medium, was the most successful display face of the twentieth century, and the Helvetica family eventually surpassed Univers in popularity.

The design of Univers was less geometric than Futura, yet it had simple, regular features. It was instantly successful and remains popular as a versatile text and display family. In the 1960s designer Paul Rand chose Univers as one of the standard typefaces for IBM, ensuring its wide acceptance, and aligning it with modern technology.

Univers was originally released in 21 weights and variations including condensed, regular, and expanded versions with weights from light to extra bold. Deberny & Peignot released both metal fonts and photographic masters for the new phototypesetting equipment. 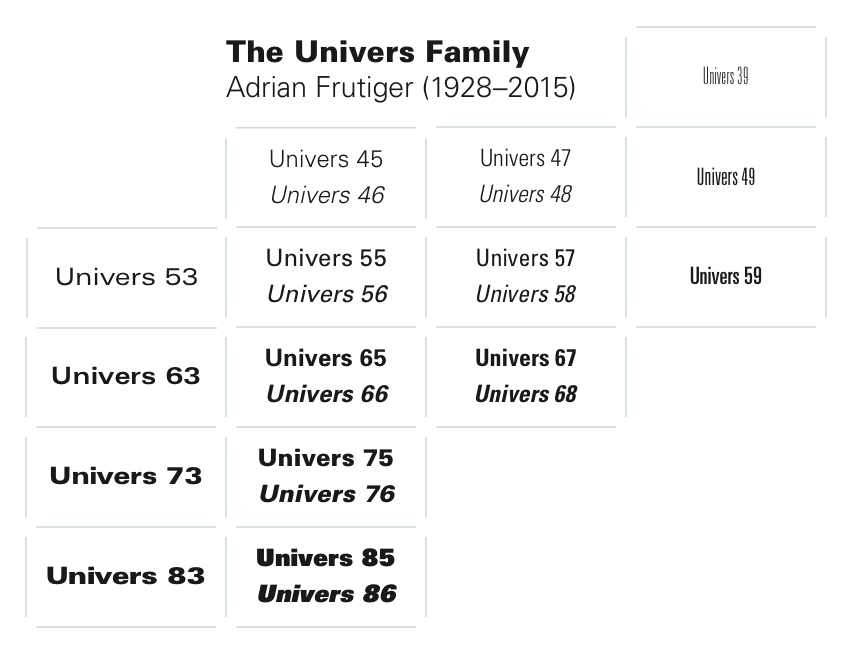 Frutiger also sought to change the naming convention for different weights within the font family. Gone were “light,” “bold,” “italic,” and “extra bold.” He assigned a number to each weight. The roman regular weight was designated “55” and all other weights would have a related numeric designation. So “56” was regular italic and “57” became regular condensed, and so on. Frutiger continued to use this numbering system in later designs. It has not been universally adopted, though, so his typefaces now carry both number and weight descriptions.

Frutiger continued creating typefaces until the early 2000s. Among his type families are Avenir, Frutiger, Glypha, Meridien, and Serifa. All were commercially successful, and some, like Avenir, were wildly successful. Frutiger combined exquisite design skill with a clear understanding of the marketplace. We will be using his designs long into the future.